So, I recently turned off the automatic installation of Windows updates on my Windows 7 Operating System because I want to avoid having Windows 10 install automatically. Well, this caused another problem: I could look at a list of updates, but there was no “Install Updates” button. Basically, the following information was missing: 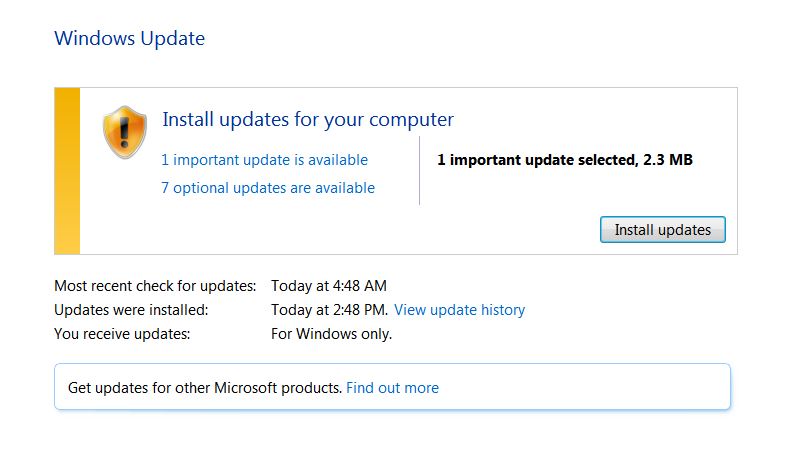 Instead of that, I saw a “Get Windows 10” banner. I really don’t mind the banner, but I need to be able to install security updates in order to keep my computer secure.

After a lot of research, I found the GWX Control Panel, which is an application that will remove the Windows 10 nag screen and help you to prevent Windows 10 from automatically installing.

I was hopeful that the GWX Control Panel would fix my problem, but kind of doubtful, as it’s not advertised as a means of fixing this issue.  But my programmer self thought that it looks like the Windows 10 banner is in the same location as the “Install updates” button that I’m used to seeing… so maybe it replaced the other?  So, I gave the GWX Control Panel a try and was really pleased with it.  It was literally a 3-minute solution.

So if you’re staring at your Windows 7 Control Panel -> Windows Update screen and wondering how do I tell it to download and install updates NOW, you’re not blind. It’s very possible that you can’t see this because instead you’re looking at a Windows 10 nag screen.  Get rid of the nag screen, and get all of the Windows Update manual control options back.

I hope this helps someone!   I tried to put enough keywords in this to get it to come up in the search results if you’re troubleshooting this issue and looking for a fix.  Before discovering this solution, I did searches for “Windows 7 Won’t Install Updates” but that just took me down a rabbit hole.

I’m so thankful for the GWX Control Panel, as I’d rather be programming than tinkering with Windows.